"I live where the drum beats in the belly of God, Lipula. I live in the house of wood with the floor of skulls, I hold my banquets there, Lipula. I fear my shadow wants to live in me, Lipula. My shadow speaks in growls and sends two legions of flies drink of my chalice, Lipula.  Lipula tell me will I live for long? Lipula tell me will I stay for long? Lipula will you not come to the hall, Lipula? Lipula will you not eat with me, Lipula?"

Song echoing from the mountains, only heard when alone.

It's a powerful call. Many fear it. If your game takes place somehwere like this, in a place of great mountains and trees larger than they ought to be, in a place where the earth growls, then the players might heed it.

Reasons to answer the call:

If you want to answer this call, you'll have to travel into the forest that grows against the mountains. Dark and musty beings await you there. Skins of men that travel across the treetops. The Nillijders, five forest kings old and young dwelling in their cave with the court of fairies. Women who sweat blood. Bones between human and animal, and the roots that cradle them like eggs. The smell of lavender, which does not grow here. Your goal is to find the house with the floor of skulls, where the call comes from.

At any point you can isolate yourself to listen to the call, and see whether it has grown louder or softer. This is your compass.

The Troll Eater is an adventure presented in three parts, or acts. This first act describes the forest you have to go through to find the eponymous Troll Eater. The next will describe the Troll Eater's lair and what it has in store for you. The third and final part will make itself apparent as it comes.

Chopwood Opera, my previous post, was born from the combat mechanics of a dead game. This adventure is born from the lore and setting of it. Credit to Vulnavia from the Lovely Dark for making stuff so good I felt I had no choice but to write this. If you want a game system crucible to pour this post into, Charlie F-A's Into the Wyrd and Wild is perfect.

The forest adheres to a few principles. That is to say, the druids and hermits of the forest have gathered from its savage phenomena a set of through-lines that appear to underpin their observations and rites. They are...limited. Incorrect, perhaps. Or rather, drawn crudely on copying paper laid over an alien web. They are the product of druid mythology surrounding the forest, which is just that: a mythology. The forest does not obey them. It isn't dictated by them. At best it is described by them.
They are:
EARTH
“All things are in a cycle above and below. Below, the earth: slow, dead, the object, the substrate. It exists in more shapes than the red, and more colours. It has a million mouths that the flesh cannot see. It breathes so deeply that it does not breathe. It moves so slowly that it does not move. The Nillijders live in its skull.”
Death, Decay, Soil, Subduing, Rest, Plants, Silence
WOOD
"A forest is the feeding organ of the dead. It is a site of fundamental bereavement and consumption. The woodland animals lick the leftovers off the lips of the earth. It is also like a brain. The thoughts of the dead are the cries in the forest at night, racing like banshees across the treetops. You will not know when it is digests you on its spiral tongue."
Confusion, Obfuscation, Maze, Forlorn, Tragedy, Loss, Secrets Kept
HEART
"All things are in a cycle below and above. Above, the flesh: rapid and alive, the subject, the savage self-instrument. The giantess Ividraud has borne the red from her blood and her seed. Flesh is a substance that the kings would not accept, so they chase it on its heels until it is exhausted, and dies.
Life, Body, Blood, Animals, Fear, Ecstasy, Fever
HORN
"There are warriors who eat the fallen antlers of stags, ground into powder that they pour into their gullet like sand and then spit at each other. The older ones do not grind them but swallow them whole, which destroys their innards. This turns them into creatures that can kill with a finger, but starve in a week."
Decision, Violence, Dominance, Contest, Weapon, Battle, Hate
HERON
"Inside an inside, there is another inside. In a wound you will find thin tubes of white meat that are like ways through the unknown. Robbers crawl in them, thieves. The birds have sharp beaks, thin like wires and long as an arm, to stick into the tubes and eat the things that travel from corpse to corpse. As they tear them apart, more tubes spill from their body."
Entry, Key, Invasion, Theft, Defence Pierced, Uninvited Guest, Travel
MOTH
"When a body dies its spirit leaves it, crawls out of its mouth and flies away as a white-pink moth. Bugs are the bastard children of the spirits and the souls of other things. A corpse that swallows enough insects will stand and its eyes will turn scaled, and the eyes will grow bushels of long antennae and the words of this apparition will be the language of the soul."
Lure, Spirit, Ghost, Poison, Transformation, Congregation, Infection
TUNNEL
“This Principle is wrong. It has never been agreed upon by druids, but over time, it has been found in every list, every diagram, every calendar. It has been called Cave, Mouth, Pit, and many other names. Where does it come from? Why is it always here?”
Mistake, Transgression, Abnormality, Fault, Fluke, Vestige
As you travel through the forest, following the sound of the call, you will encounter many manifestations of the forest. Here are a few:
D10 Phenomena 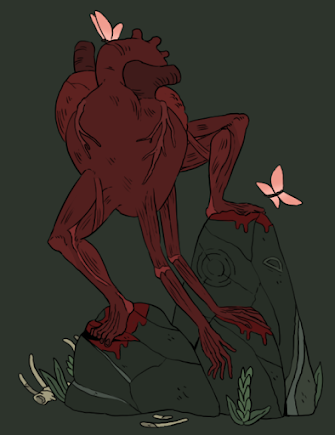 Art by me!
D10 Monsters
D6 Infections:
D20 Visions:
D6 Conditions for finding the house with the skull floor:
Posted by Monsieur Le Battlier at 10:26 AM