"To perform the occult is to perform predation upon mankind; for indeed, in no sense can the byzantine art that worships the gods of the creatures before man be of benefit to a race, that could only flourish by the virtue of its disappearance. It is an act that, by nature, declares hostility to humanity's survival interest. Because the predator is an agent of destruction, he leaves a trail of detritus; of carrion. I am a vulture that eats lions."

"Humanity is and has always been the only resource of our kind. The slaves that built the great pyramids and mined the stones now bleed on the factories and the office desks instead. Any resource our planet has to offer is harvested at an exchange rate of human time and life. Any structure we build, any matter or thought we organise, we pay for with humanity. It is the only thing the Art desires of us, because it is the only thing we have to offer."

These tables are two things, depending on how you look at them. If you're a seasoned noire detective who has never seen a case quite like this one before, then they're a table of clues that you can use to figure out what the hell they're talking about behind the smoky meeting room's closed doors. If you're a sharp-minded character who's willing to lift the veil and look beyond into the abyss, then they're tables of materials and prerequisites for your next expedition into the deeper truths.

There are four tables here. One contains indirect matters. They only get you so far in your investigation. They're things you need, not for the ritual itself, but for business surrounding it. When you're a detective you discover or learn of them. When you're a cultist you have to obtain or enact them. The second contains direct matters. They are clear as day, and their implications terrifying. These are the heart of the matter. Your ritual won't work without them. The third contains books and documentation. Getting a hold of these may tie seemingly unrelated things together. They contain the lore, instructions and invocations you will need. The fourth contains people. To question. To tail. To rescue. To fight. To avoid. To control. To enlighten. To sacrifice. 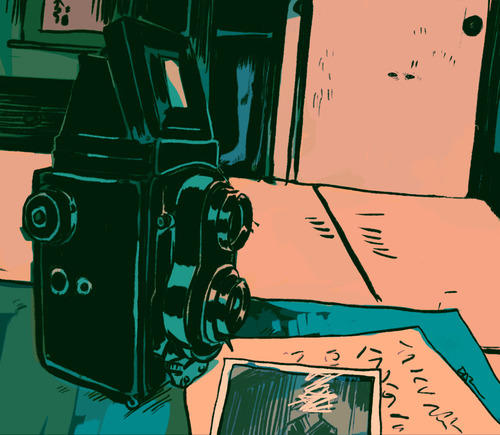 (All above art by Daryl Toh. Happy Narblesnard from the Santicore, Marquis!)
Posted by Monsieur Le Battlier at 3:07 PM