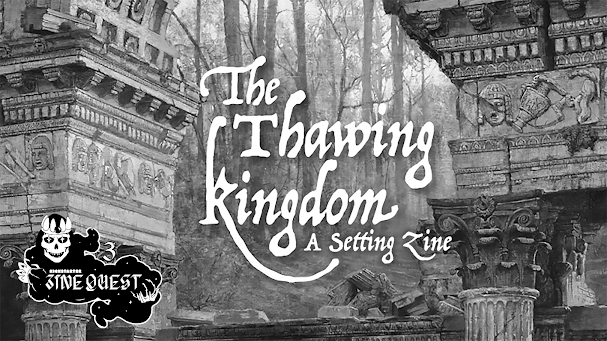 BACK THE PROJECT HERE!

Posted by Monsieur Le Battlier at 9:17 AM 3 comments:

I'm currently slicing up the half-formed body old game, which turned out far too ambitious for both my product-making skills and the amount of time I had. It was a big part of my learning process regarding game design, and went from a sickening, bloated union between Pathfinder and Darkest Dungeon to something like Into the Wyrd and Wild. Its name was The Cave In The Wood.

I worked on it for a few years, and at this point, I've made peace with the fact that it's unlikely to actually become a finished product. However, it has a lot of good bits that are worth salvaging and putting out into the world. That's why I'm going elbows-deep into its corpse with my butcher knife and repackaging some choice cuts from this dead cow into a menu for the people.

This is the first steak to come out of that effort. It's the health, damage, and combat ruling, which I'll now call CHOPWOOD OPERA rules. [♫]

Everything has PARTS. At least one, never more than six. At least one is lethal if it's destroyed. A human, like the player, has four parts: head, torso, arms, and legs. The head and torso are lethal when destroyed. The smaller something is, the fewer parts it should have.

A hit gives a part a WOUND, which cripples the part and gives you a drawback. On two wounds, the part is destroyed or severed. Anything with more than three total wounds dies from being ripped to pieces.

To fight, you have a FIGHT DIE. You start with a d4. When you improve your fighting power by whatever means, it goes one tier higher: becomes a d6. This goes on, up to d20. Enemies also have a Fight Die that ranges from a d4 (weak) to d20 (fuck you).

Two combatants pick a target part and roll the Fight Dice against each other when they have at it. The HIGHEST ROLL gets to land a hit. With matching dice, both parties land their hit.

MOVEMENT is abstracted, and therefore, so is RANGE for the most part. If you have a scenario where one of the two parties landing a hit on the other is absolutely impossible (sniper shooting man with shiv), but the shiv man does win the fight roll, replace "man with shiv landing a hit" with either an ally of the shiv man landing a hit, or the sniper getting a wound because of a fuckup or the shiv man's cunning shiv plan. When the fight die is rolled, someone gets hurt.

In BIG FIGHTS with lots of fighters, apply as follows: Everyone chooses a target, and all roll at the same time. Read out from highest Fight Die roll to lowest. If someone becomes unable to make the attack they were rolling before their die is read out, by dying or having the limb they're attacking with wounded, their attack doesn't happen.

ARMOUR is a chance out of 6 (roll a d6) per part to stop a wound, representing how well that part is protected. Adding more layers of armour ticks up that chance, but wearing 6 thick shirts over each other that give you 1 in 6 when worn alone does not give you 6 in 6. Every layer has to be distinct. However, doing the aforementioned you can upgrade your heavy shirt armour of 1 in 6 to many heavy shirts that gives 2 in 6, or give it a total of 3 hits instead of 1 that it can take.

Armour that stops an attack takes a hit. Depending on the attack, armour will also take a hit if it's bypassed: if your armour is a helmet and the attacking weapon is a sledgehammer, that's gonna go through the helmet to hit you rather than around it. Better armour can take more hits before it breaks. No armour should have more than 4 hits it can take. Armour that has taken some hits can be repaired, armour with all of its hits exhausted is destroyed.

Hits are tracked per armour piece, not part: gear that protects multiple parts takes a hit when it stops a wound on any of them.

The definition of armour, and hits to armour, is not strict. A hit could mean the force that protects you tires out or otherwise becomes less able. Here are some more atypical pieces of armour:

DEATH INSTINCT is a 2-in-6 piece of armour that protects all lethal parts (in the case of the player, the head and torso). Death Instinct activates only when all other armour fails and can take only one hit, but is restored when the holder survives a fight.

Death Instinct is an OPTIONAL rule to slightly reduce lethality and incentivise attacking non-lethal limbs for a more cinematic fight.

YOU GOT ALL THAT? OKAY! NOW FIGHT!

Posted by Monsieur Le Battlier at 6:25 AM 3 comments: