I Love The Blacklance Paragon

It's been a while since I posted anything, frankly because I've just not had the inspiration, and because I've been working on something that is larger, and upcoming. For now, I have two posts for you.

One of them is Simply Vampires. It will come, soon.

The other is this one.

It's about "Blacklance Paragon," which, according to me, is the perfect Magic: the Gathering card.

Okay. I hear you think: Really? I come here, hoping for some enjoyably purple esoteric je ne sais quoi, and now he's gonna talk about Magic the fucking Gathering.
Yes. Bear with me.
Why is Blacklance Paragon the perfect Magic card? Why should you care? Well, because the things that make Blacklance Paragon good are bigger than Magic. They're design principles for the relation between art and game mechanics, and how to make the most of that relationship.
I think that Blacklance Paragon can make you a better game designer. And I will keep saying its full name.
Let's look at the actual card. 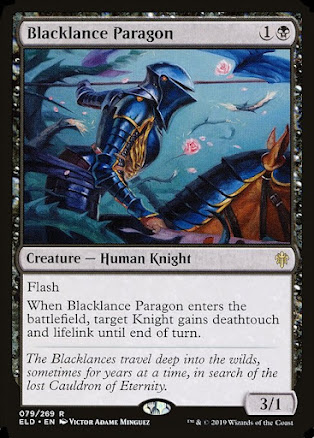 There we go. At a value of not even a dollar, you can get a sinister looking black knight bursting through a thorny thicket on horseback. The Paragon has to be paid for with black mana, which is the spooky evil mana that you also use to pay for things like zombies and skeletons and spells fuelled by lots of creatures dying. Remember that last one.
So, at first sight the Paragon probably villainous, because it has this gothic black knight thing going on, but it's also a bit heroic: the pose is determined, we've got the dramatic roses being flung up around it, and it's called paragon, which sounds quite noble. It's also got somewhere to be, which is why it's going fast. Its appearance is sudden, ripping through the scenery to burst into its own portrait. That's the visual identity of this character: what you can tell about it just by looking at it.
Now let's look at the mechanics.
First of all, the Paragon has "Flash". In Magic, that means you can play it at any time, even when you normally can't put new monsters on the field, like during your opponent's turn. It's meant to catch your opponent by surprise. It also only costs two mana, which is a small cost that, if you leave it open for use after your turn, your opponent might reasonably overlook. Black mana isn't known for having lots of sudden counterspell or trick cards either.
Then comes the kicker: when the Paragon comes into play, you can give a Knight type monster you control "Deathtouch" (it destroys any monster that it hits) and "Lifelink" (any damage it deals is restored to your player life total) until the end of the turn. The Paragon is itself a Knight type monster, so you can have it come in and immediately apply this effect to itself.
In other words, the Paragon is here to (a) kill something, and (b) give you some life back, making sure you can survive a little bit longer. It has a short window of time to do this (until the end of turn), but it can come in with the element of surprise, because it has "Flash."
Its power and toughness are 3 and 1. That means it'll deal 3 damage (meaning you get 3 life back), but if it takes so much as one measly point of damage, it'll die.
What this means is that when you play Blacklance Paragon, it will probably go like this:
Your opponent has a big horrible monster. It's their turn, and you don't have much in terms of defenders that will be able to stop it - you're on the ropes. They declare the attack. The enormous, terrible beast is coming straight towards you, with more than enough power to end the game if it hits you in the face. Your fate seems inevitable.
And then you flash in Blacklance Paragon.
It appears out of nowhere, charging into the battlefield to save you. You can use it to block the monster in the nick of time, and kill it to boot because your Paragon has "Deathtouch" for one turn. You regain some life because of the Paragon's "Lifelink," meaning you can hang on for just a little bit longer, and get another chance at victory. In this noble deed, however, the Paragon with its toughness of 1 gives its life stopping the lethal threat.
Its visual and mechanical identity converge. This dastardly-looking, dark-armoured deadly Black-lanced knight, appears suddenly at high speed and with a mission. With no regard for danger it tears through enormous thorns to save you and protect your life, at the cost of its own. Because it's a Paragon.
But it's also a black mana creature. This noble act furthers the cruel goal of the greater power that it serves. When Blacklance Paragon saves you like this, not just a creature of the enemy dies, but one of yours too. That's twice as much death to work with for cards like Syr Konrad the Grim (who makes your opponent lose life when creatures die), or Open the Graves (which creates zombies when your creatures die).
What I've just demonstrated is the bottom line of this post. Everything the Blacklance Paragon does in the game is represented perfectly in the art it actually has. The flavour hits exactly the same spot as the dry, mechanical function of the card.

So, what's the strength of Blacklance Paragon?
Its strength is art that tells you not only what a monster is, but also what it's going to do. Blacklance Paragon doesn't require your imagination to think up a story for it, because it has a story that's in both its art and mechanics, and that has nothing to do with whatever's in the superfluous flavour text is underneath it, or god forbid, in the lore.
And I just think that's neat.
Posted by Monsieur Le Battlier at 1:54 PM