Parasites and Afflictions of the Elf

I initially thought that with my first and second post, I'd have said enough about bizarre aphid-like clonal elves. However, an astute commentor on the red post gave me the brilliant idea of making some plague-taken elf encounters. So, that's what this is about. The curious, tragic and aesthetically entrancing interplay between horrible disease, and beautiful creatures.

There are a few particular parasites and sicknesses that have been ails to the elves for generations, lurking in the shadow of their luminous forms with with mould-cloak and virus-dagger. After all, the gene reshuffle of the red form only ascertains their untouchability for so long, and these cunning parasites are the first to regain entry to the sanctuaries of the elf. When a trace or symptom of any of these is detected, the victim is immediately killed and incinerated, and the whole enclave is maniacally sanitised. There are many mythic depictions of these illnesses in Elven culture despite its fragmented nature (due to "Elven culture" being just a collection of many cases of hyperisolated mini-cultures). 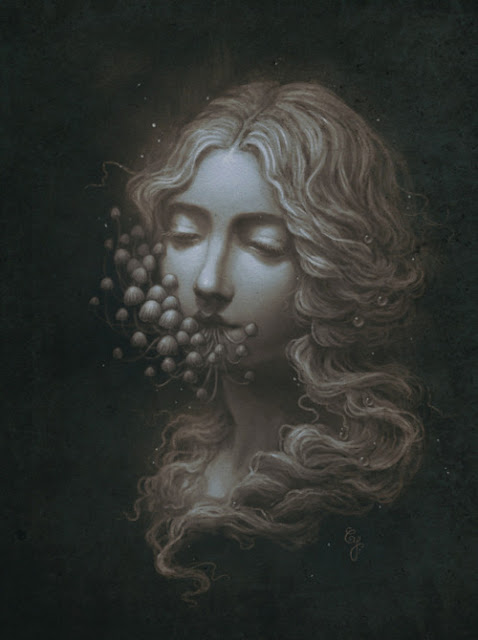 Wolfsnow is an airborne mould, drifting through the air and growing in beige-white fuzzy spots on the skin resembling snowflakes. For elves, given their stark white skin, this is very hard to spot, only clear when the mould starts secreting its blood-red pearls of bird- and insect-attracting liquid, which it uses to infect birds and flying insects and spread itself through flaking off them, and ending up on carrion that other creatures may feed off of.

Creatures infected by Wolfsnow become covered in the white snow-like mildew, oozing sweet-smelling dark red syrup substance like blood. They cough terribly since the mould is in their lungs, and this sounds like barking. The fungus will continually be flaking off them, leaving a trail of floating snow in the air. When infection is strong, the victim is compelled to climb trees and seek high places- this allows the flakes to spread better with the wind. Wolfsnow is both hard to eradicate, and spreads very easily once one or a few victims of considerable size have been infected. Wolfsnow infects almost any animal, not just elves.

Areas heavily infected by Wolfsnow become eerie fake winter landscapes soiled with dark red "blood", a layer of fungus flakes covering the ground and floating in the air like falling snow. The area is absolutely rife with flying, buzzing insects attracted to the syrup. Corpses of its inhabitants hang in trees and are heaped on top of tall buildings, or are collapsed on stairs and ladders, spreading more fungus on the wind. Barking choughs of the few still living victims echo in between the buzzing. Everything smells of syrup and carrion.

The fresh, minty and clinical air in elven settlements is caused by the powerful fungus-killing detergent they vaporise everywhere. Insects that attempt to enter are turned to ash by magic. This is effective, but not flawlessly foolproof. 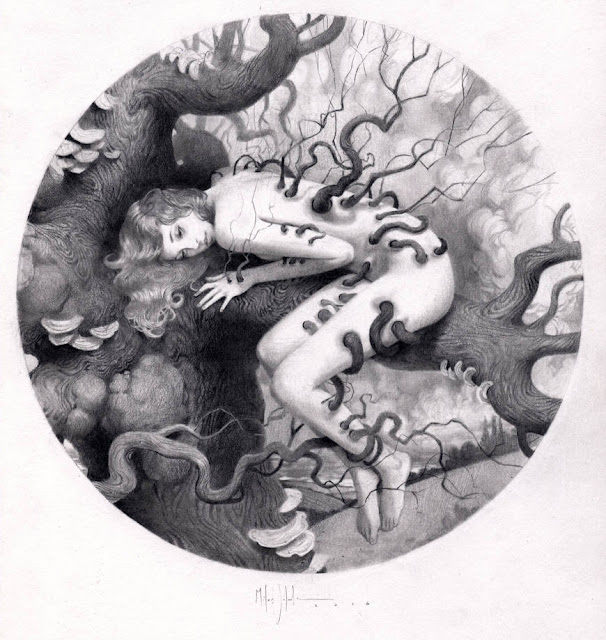 For a long time Elves thought Dryaditis is caused by an unbalanced diet and excessive consumption of fiber, which even to this day they pretend to all believe to socially enforce good eating habits. Elves micromanage their diets, as is to be expected from them, and generally don't eat meat, not out of empathy or pity for animals (in fact they tend to find them disgusting), but out of fear for parasites and such. Ironically enough the only kind of meat elves find somewhat acceptable to eat, because they are certain it is free of disease, is, well, Elf meat. There are some grisly stories to tell about that. But another time, another place.

In truth Dryaditis is caused by a beetle, Scolytus incubus, which has a symbiotic and parasitic lifestyle. It comes in many variants, all linked to species of its partner in crime, the Lamiasalix genus of trees. The beetle obtains a seed of the tree, and then carries the seed around until it finds an appropriate host, namely an unsuspecting elf. Once ready, it flies at her with the seed clutched to its thorax, and with its bore-like mandibles, burrows into her skin, inserting both the seed and its eggs into the wound, and secreting a clotting agent to prevent them from being removed with ease. The beetle dies there, as an additional obstruction to clawing fingers.

As you have probably guessed, the tree seed, when it finds itself in sufficiently warm conditions, buds and grows at an abnormal speed, consuming the elf for biomass. Not awfully efficient, but efficient enough to produce some sturdy branches with plenty of leaves that bear spores for the sexual generation of the tree (which looks like a relatively normal tree). Now, the beetle's eggs are in there too, ending up as little galls on the branches, and once they hatch, the larvae have an immediate supply of the leaves they need to eat. They'll metamorphosise, and scuttle away, carrying the spores around as they go. They pick up the seeds of the non-parasitic trees, mate somewhere along the way to produce eggs, and there you have it, the circle is round. The awful, disgusting circle of nature. Charming!

What does this mean in practice? You'd think that one elf turning into a tree isn't exactly a community-wide issue and quickly incinerat- er, cured. Well, unfortunately the buggering beetles, when the trees deposit their seeds, are all looking for an elf nanny to take care of their precious babies. And since elven communities are so sparse, they flock to them in droves when they do. The result is either a beetle genocide if the elves are lucky, or a pristine shining city full of listless emaciated bug-hive tree-zombies if they aren't.

What do elves do against this? Well, they always have ungodly amounts of pesticides at the ready. In fact, the soil of elven enclaves is already one of the most poisonous forms of dirt you can find anywhere, since they empty watering cans of bug killer onto it. Drinking water that's been within a mile or so of them is highly ill-advised.

That's right. Not another fantastical parasite. I was writing this and thought, well, you can probably come up with some viruses and shit on your own. And this post is already pretty long. So I think I'll devote short paragraph to perhaps the most common affliction among elves. Chemical poisoning. And don't be mistaken, they do it themselves. This post has made clear that their enclaves are swamped with pesticides, fungicides, everything-icides. They purify everything extremely harshly of any infection or bacterium. However, that leads to many elves, especially the very old ones who are the most germaphobic, having irritated and bloodshot eyes, being constantly nervous, having frayed and sickly-looking hair or even going bald. They cover this up with layers and layers of cosmetics and wigs and all such things, because they're awfully fond of their beauty. In fact they're much like victorians in the time where there was still mercury and lead in make-up and such things.

Every once in a while an Elven encale is suddenly completely wiped out, without a trace of disease or violence or any such thing. The unfortunate truth of these cases is that, well, they got so poisoned by their own cleaning chemicals that they became infertile. And if you have to give birth to yourself every week to survive, well...